Fuel Cells: Saving You Money and Moving Maine to a Cleaner Grid

When it comes to reducing your business’ electric bill – and emissions – it may seem like there’s nothing you can do. Sure, there are ways to be more energy efficient and limit your electricity usage, but your organization can’t simply turn off the lights or decrease production. Thankfully, Mainers can make a choice that saves them up to 10 or 12% on their annual electric spend and help facilitate a clean energy transition: subscribing to a local fuel cell project!

Read on to learn how fuel cells help Mainers save money, phase out dirty fossil fuels, reduce emissions and provide support during outages.

But first, what is a fuel cell?

A fuel cell is a device that takes a small amount of fuel (typically natural gas) and converts it directly into electricity without combustion. Air and fuel pass through the fuel cell and create a powerful chemical reaction that generates electricity.

Fuel cells are completely safe, efficient, and much smaller in size than solar farms, wind turbines and hydro-electric power. Fuel cell technology was spurred from two NASA colleagues who decided they should bring this ‘out of this world’ technology to Maine!

Benefits of Fuel Cells for Businesses

You’ve probably heard and seen a lot of buzz about energy costs in the news, in conversation, or even in communications from your utility company. Indeed, supply rates are going up again in Maine in 2023 – by as much as 50% for CMP customers and 20% for Versant Power customers. Residents and businesses alike will be impacted by yet another dramatic rate hike.

Subscribing to a fuel cell project in Maine ensures that your business or organization receives a fixed discount on electricity costs. Once the fuel cell project “turns on,” or starts producing electricity, Versant Power customers can expect up to 12% savings on their electricity costs and CMP customers can expect up to 10%. These savings make fuel cells an attractive option for businesses looking to lower their energy costs.

How does it work?

Maine has set some pretty admirable sustainability goals. In 2020, the state committed to achieving carbon neutrality by 2045 and decreasing greenhouse gas emissions 45% by 2030 and 80% by 2050. As stated in the four-year climate action plan implemented by Governor Janet Mills: “This transition must be managed effectively to ensure affordability and reliability.” Enter: Net Energy Billing.

Supported by the state of Maine, this subscription-based model is made possible by Net Energy Billing legislation that passed on both sides of the aisle in 2019. Maine’s Net Energy Billing (NEB) program is intended to help utility customers support the generation of renewable energy sources and diversify Maine’s electricity sources, making the grid more resilient while contributing to the state’s sustainability goals. Under NEB legislation, utilities are required to accept electricity from Community Energy projects like fuel cells and solar through grid interconnections, and assign solar credits to subscribers based on the energy generated.

The truth is, if we’re going to stop the catastrophic dangers of climate change, we need to displace as much combustion-based fossil fuel energy as we can – as soon as possible. One of the main benefits of fuel cell projects is that they are quick to develop, and therefore quick to turn on. Fuel cell projects can be constructed in as little as three months, whereas solar farms can take over a year.

For this reason, fuel cell implementation will help Maine slash its carbon emissions quicker and enable the state to meet its climate goals. Faster project development also means that your business or organization will start saving on your energy costs sooner!

While fuel cells might not be an entirely fossil fuel-free energy source, they are highly efficient and produce less emissions than traditional power sources like coal, oil and natural gas plants. According to the Environmental Protection Agency (EPA), a traditional, combustion-based power plant is only about 33 to 35% efficient, meaning only 33 to 35% of the fuel consumed by the power plant is turned into electricity. Meanwhile, fuel cells operate at 60% efficiency or higher. Therefore, fuel cells are able to better maximize the output of the energy-producing reaction so that a greater percentage of the energy produced goes to the grid.

Fuel cells can also use clean hydrogen as a fuel source instead of natural gas. Because Maine joined the Department of Energy’s (DOE) Regional Clean Hydrogen Hubs initiative, the state will receive funds to make hydrogen more readily available. Maine is slated to receive 6 billion dollars in funding from the federal government that will enable hydrogen-powered fuel cells in the near future.

Additionally, fuel cells take up less space than other power options like solar panels. While solar is a true clean energy source, the panels take up ~125 times more space in terms of output per square meter. Fuel cells are most commonly developed on industrial property or pre-existing concrete lots, so construction and environmental impact are minimal. Fuel cell projects take up an estimated 2,000 square feet on average, which make parking lots great hosts for these projects.

Lastly, fuel cells become significantly cleaner when carbon accounting is considered (i.e. the total emissions from end-to-end). When you take into account all of the possible emitters including transportation, manufacturing, etc., in addition to the emissions output of the energy source itself, fuel cells displace significantly more carbon than zero-emission energy sources. 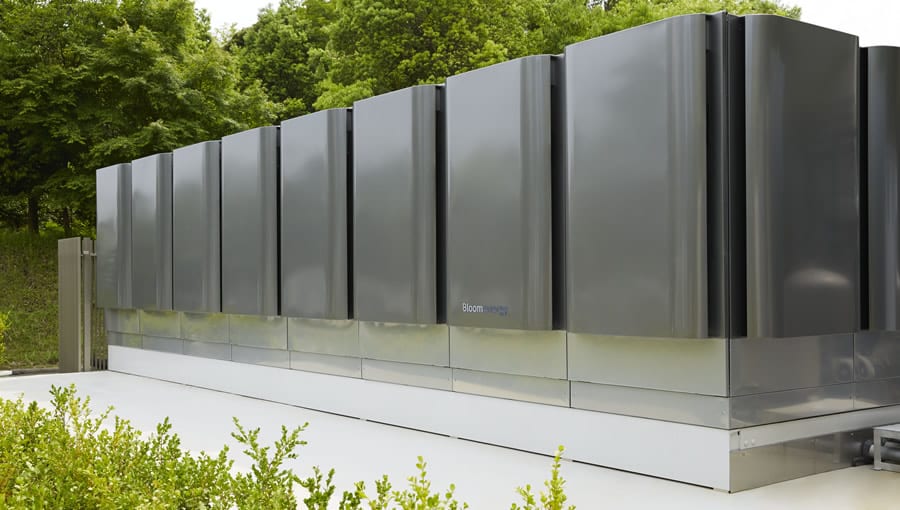 Helps on the Margin

Fuel cells make Maine’s grid more resilient by reducing the load on traditional electricity sources during peak times, and carrying critical load during outages. Fuel cells are one of the most reliable forms of electricity and have the capacity to power entire communities. Additionally, whenever a fuel cell project is connected to the grid – or any new, cleaner energy project for that matter – it reduces the need for “peaker plants” to be used. Almost always fossil fuel plants, peaker plants are energy sources that are reserved for when demand is high. And since the demand for electricity continues to increase and temperatures are fluctuating more and more, the need for these types of cleaner energy alternatives becomes critical. Additionally, fuel cells can operate 24/7/365 because, unlike solar and wind power, fuel cells are not weather dependent. They consistently produce high volumes of electricity all year round.

The output, or capacity factor, of a fuel cell is more than six times greater than that of a typical solar farm. This means fuel cells generate more electricity – and more credits for subscribers – for each megawatt of capacity that is deployed. For example, a 1 MW fuel cell project produces more electricity than a 1 MW Community Solar project.

That high-capacity factor means fuel cells generate electricity during those peak times when the grid needs it the most (e.g. from 5:00 PM to 9:00 PM when demand is highest), so fuel cells create more value by reducing peak loads on the system.

Fuel cells offer many advantages over traditional combustion-based power plants — not the least of which is their ability to save businesses and organizations money! But they're also more environmentally-friendly and way more efficient. Fuel cells take up less space than most other forms of energy and account for fewer total, end-to-end emissions than even the cleanest energy sources. Not only are they key to Maine meeting its clean energy goals and improving its resiliency to outages, but businesses and electric bill payers in Maine stand to benefit greatly from their implementation. If you're looking for ways to reduce your carbon footprint, lower your electric bill and support Maine's clean energy goals, visit ampion.net/fuelcells today.